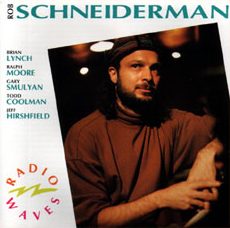 The material for Radio Waves was developed during countless “laboratory” sessions in Rob’s New York City loft. The free-spirited arrangements and high-intensity blowing combine the power of a large ensemble with the spontaneity of a small group. Joining Rob are Brian Lynch on trumpet, Ralph Moore on tenor saxophone, Gary Smulyan on baritone saxophone, Todd Coolman on bass, and Jeff Hirshfield on drums. Seven of the nine tracks are Schneiderman originals: “Extra Time”, “Gravitation”, “Slapdance-Tapstick”, “Been There Before”, “The Juggler”, “Twelve Tones of Blue”, and the title tune. Also included are intriguing arrangements of the Rogers and Hart classics “Blue Moon” and “There’s a Small Hotel”. “…a communicative modern jazz of rich colors and intricate designs” –Down Beat

2022 Rob Schneiderman  •  This site is part of JAZZCORNER

2022 Rob Schneiderman
this site is part of JAZZCORNER