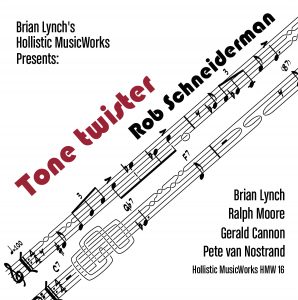 Downbeat Magazine (February 2018)
“Throughout his sideman stints with notables such as James Moody, J.J.
Johnson, Art Farmer and Eddie Harris, his tenure in the band TanaReid and
his 10 previous discs as a leader, pianist Rob Schneiderman has shown a
straightahead heart marked by lyricism and no-nonsense taste.

That holds true on this set featuring eight originals burnished with subtle left
turns and infused with shades of Latin (“Footloose Freestyle”), blues
(“Tone Twister”) and even a dose of half-time funk (“Left Coast Lullaby”).
The centerpiece grabber is “Slapdance-Tapstick,” an uptempo swinger
inspired by tap dancer Buster Brown.

This quintet’s sumptuous sound owes much to the rich, warm front- line
union of trumpeter Brian Lynch (who owns the label and produced) and
tenor saxophonist Ralph Moore. These two luminaries are, of course,
tremendous soloists. But the key here is their rare sonic blend.

Bassist Gerald Cannon—taking time off from his long tenure as McCoy
Tyner’s musical director—lends his signature fat, solid support, while
drummer Peter Van Nostrand is grooving, probing and catalyzing
throughout. In essence, it’s the sound of a deeply connected quintet.”
– Jeff Potter (3 1/2 Stars)

Aquarian Weekly (10/18/17)
“For his first new studio effort in over a decade, pianist composer/
mathematician Rob Schneiderman has taken on the role as a Tone Twister
(HollisticMusicworks). Backed by a terrific front line of Brian Lynch on
trumpet and Ralph Moore on tenor saxophone, augmented by drummer
Peter van Nostrand and bassist Gerald Cannon, Schneiderman performs
nine originals plus the 1952 Nat King Cole hit, “Unforgettable”. A veteran in
the 1980s bands of James Moody, JJ Johnson and Art Farmer,
Schneiderman will be the first to tell you that he’s an old road dog who has
performed in such exotic locales as Brazil and Indonesia.

Opening with “Footloose Freestyle,” it is here where he takes the slaphappy
funk of Eddie Harris (in whose band he also toiled) and juxtaposes it
with the Latin fire of Eddie Palmieri. “Left Coast Lullaby” is for his San
Francisco roots while “Windblown” is a rewrite of “Lover,” a song Jeanette
McDonald sang in the 1932 movie, Love Me Tonight. The highlight has to
be the 7:30 “Slapdance-Tapstick,” where he approximates the kinetic
artistry of tap dancer Buster Brown (with whom he once backed). The blues
of both the title tune and the languorous 8:36 closer (“The Lion’s Tale”) give
Tone Twister extra profundity. Wholeheartedly recommended.”

Dee Dee McNeil, Musical Memoirs
“Here is a CD full of compositional diversity….The amazing talents of Brian
Lynch on trumpet and Ralph Moore on saxophone certainly add spark and
creativity with their horn lines and individual solos on this tune and
throughout the album. Schneiderman’s choice of band members is superb
and each brings their genius into play on this project. All eight of
Schneiderman’s original compositions are works of art…hear this seasoned
veteran reflect his many influences in both his compositions and piano
style. Every cut on this production is wonderfully arranged and celebrated
by Schneiderman and his star-studded band. This is the kind of jazz album
that never grows old.”

Midwest Record
“A smoking sizzling date from a pro that never had any fear of doing what it
took to rise through the ranks and earning while he learned…the piano man
leads the crew in raising a joyful noise that any mainstream groover will
prothelize over. If you don’t know this cat from his past glories, it’s time to
get in queue. Hot stuff throughout.”

2023 Rob Schneiderman  •  This site is part of JAZZCORNER

2023 Rob Schneiderman
this site is part of JAZZCORNER